Tehran 29 March_At least one ballistic missile and a rocket have been intercepted in the sky above the Saudi capital Riyadh and the southern city of Jazan, Saudi state media report. 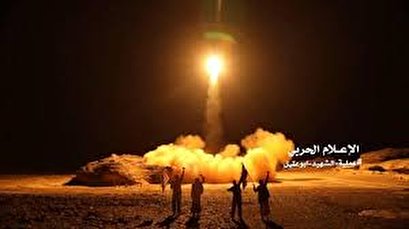 TEHRAN, Young Journalists Club(YJC)_Saudi-owned Al Arabiya television reported that “two rockets” were intercepted on Saturday in the sky above Riyadh and Jazan, citing its correspondent and sources.

However, state-run Al-Ekhbariya television reported that a “ballistic missile” has been intercepted and destroyed over Riyadh.

AFP says its reporters have heard three explosions in the capital.

No one has claimed responsibility for the missile or rocket attacks on Riyadh yet, but the kingdom has been frequently targeted by the retaliatory attacks of the Yemeni army and allied popular forces, who for five years have been defending their country against the devastating Saudi-led military campaign against innocent Yemenis

Meanwhile, Yemen's air defense has managed to force several Saudi warplanes to leave the country's airspace, according to the Yemeni Army spokesman.

Yahya Saree said on Saturday that Yemen's Fater-1 air defense system confronted the jets, which were flying over the capital Sana’a.