Gun stores in Los Angeles, California will be allowed to open after days of discussion over whether they are an essential service amid tightening restrictive measures to contain the coronavirus. 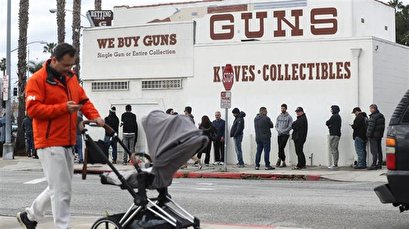 Los Angeles, the largest city California, is subject to a state-wide stay-at-home order, meaning only essential services can remain open.

The next day, he, however, withdrew his order. but, later in the week, Villanueva reiterated again that gun stores are not essential businesses and must close.

Then on Friday, The powerful US pro-gun lobby group, National Rifle Association (NRA) and other gun owner groups filed a lawsuit against California Gov. Gavin Newsom and other state and county officials. Newsom’s shelter-in-place order in face of the coronavirus pandemic had forced the shutdown of gun shops. Now, Villanueva has backed off again, saying gun stores will no longer be closed.

He said in a statement, “The Los Angeles County Sheriff’s Department will not order or recommend closure of businesses that sell or repair firearms or sell ammunition. Regardless of whether a business sells groceries, gasoline, firearms, or any other product or service, we encourage them to abide by all health and safety measures in place."

Kris Brown, president of Brady, one of the leading gun violence prevention groups in the US said, "In this time when we all need to sacrifice to flatten the curve and stop this pandemic, it is disturbing that the NRA won't budge from its overriding purpose -- to increase gun industry profits at any cost."

Over the past two weeks, Americans have stocked up on guns and ammunition fearing the pandemic could lead to social unrest.

“We have had about an 800 percent increase in sales,” said David Stone, owner of Dong’s Guns, Ammo and Reloading in Tulsa, Oklahoma. “I’m still not out of any caliber but I’m getting close to running out.”

Guns stores in the state of Washington, one of the US states hardest hit by the virus, have also seen a massive uptick in sales with customers lining up an hour before the store opens.

Americans fear the social order will unravel if the health and economic crisis caused by the virus escalates.

Gun control advocates say they are concerned about a large number of new US gun owners lacking the usual access to training on how to store and handle their weapon properly.

The advocates say the decisions by some state to exempt gun stores from closure orders only helps the corporate gun lobby to sell more weapons.