US President Donald Trump has still resisted declaring a nation-wide stay-at-home order, leaving many concerned over his administration’s failure to halt increasingly tragic deaths from the coronavirus outbreak across the country. 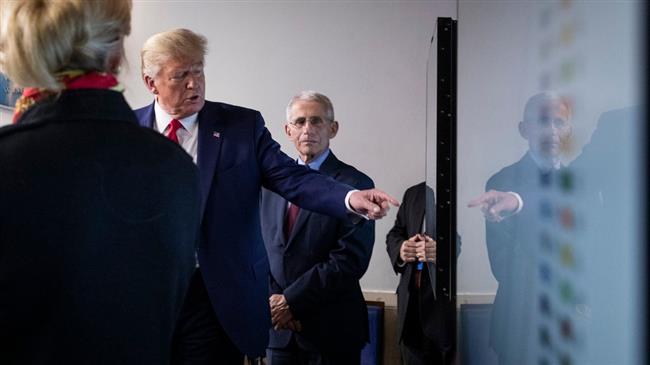 COVID-19, which has been spreading across the US since late January, infected more than 216,000 people and claimed the lives of over 5,118 others, as of early Thursday morning.

The president said on Wednesday that he and his administration officials had discussed issuing a stay-at-home order, but it was “pretty unlikely” for now.

Trump also said he wants to give governors' “flexibility” on whether a stay-at-home policy is the best option for their constituents.

Health experts warned that the consequences of further inaction in states like Texas in particular could be calamitous.

The president may not have the legal authority to halt interstate travel or require governors to lock down a state, according to director of the O’Neill Institute for National and Global Health Law at Georgetown University, Lawrence Gostin.

But Trump has yet to fully use the power of his bully pulpit to encourage the governors to do so, Gostin argued.

"What President Trump could do is send a much clearer signal that he wants all governors to do a lockdown on their states, to guide them about what that lockdown would require and what the standard should be," he added.

Authority to order quarantines inside states rests almost entirely with states under provisions in the US, but legal experts say the Constitution’s Commerce Clause may vest Trump with powers to impose a multiple state or national lockdown with or without states' approval.

The coronavirus, which has also been taking toll on the world’s economy, is now threatening Trump’s re-election bid as well.

According to the World Health Organizations (WHO), the economic downturn and job losses from the pandemic would be even worse than the 2008 recession.

Trump himself admitted formerly that the virus outbreak could threaten his re-election bid this year, and could plunge the US economy into a recession.

He is striving to create an illusion of success to win the presidential election. According to analysts, to win, Trump needs to persuade a sufficient number of people to forget his stunning mismanagement and politicization of the pandemic and his repeated lies and denials of the threat posed by the outbreak.