President Hassan Rouhani has warned the International Monetary Fund (IMF) to consider Iran’s request for $5 billion without “discrimination” after reports said the US was seeking to block the loan. 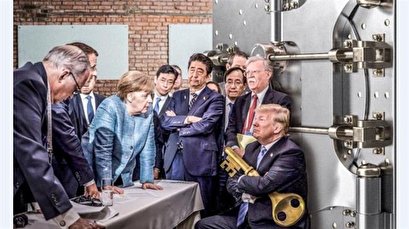 While the IMF has said it is in dialogue with Iranian authorities to understand Iran’s needs and what is required for Tehran's demand to be processed, several reports say the fund is under the US pressure to forego the request.

“We urge all international organizations to fulfill their legal duties. Iran is a member of the International Monetary Fund and the World Bank and has always paid its shares; some of our resources are at their disposal,” Rouhani said on Wednesday.

“If there is to be discrimination between Iran and other countries, it is not tolerable for us and the world's public opinion,” the president added.

Iran is currently the worst-hit country by the coronavirus in the Middle East, where the respiratory disease has killed more than 3,800 people and infected over 62,000 others.

"We haven't asked for anything from this fund for the last 50 years even as we have fulfilled our obligations. If they [IMF] do not fulfill their duties in these difficult circumstances, the world will have a different take on this issue," Rouhani said.

Will IMF stand up to US bullying?

Secretary of Iran’s Supreme National Security Council Rear Admiral Ali Shamkhani said over the weekend that the United States was using its clout within the IMF to stonewall the loan request.

The US has the largest number of shares within the IMF, giving it 16.5% of the body’s total votes. Technically, other IMF member countries could amass a majority of votes to approve Iran's loan even with US opposition. The Europeans and many other countries have reportedly come out in favor of the loan.

"Many countries around the world and thinkers have also stated that the International Monetary Fund must fulfill its obligations to the Iranian people," Rouhani said.

Iran’s Vice President for economic affairs Mohammad Nahavandian said Tuesday night that the US has no right to block the loan after US media reports said Washington planned to veto the Islamic Republic’s request.

“No country in the International Monetary Fund has the right of veto and the IMF’s policy is to be fair in assessing and approving loan requests,” Nahavandian told CNN’s Christiane Amanpour.