In New York City, an intensive care nurse treated patients for three days after she started displaying symptoms of COVID-19 - but couldn't get a test from her hospital. 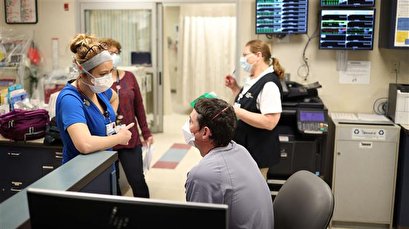 In Georgia, a nurse was denied a test after treating an infected patient who died.

In Michigan, one of the few hospital systems conducting widespread staff testing found that more than 700 workers were infected with the coronavirus - more than a quarter of those tested.

More than a month after the pandemic hit the United States, the persistent test shortages mean that health workers are treating patients while experiencing mild symptoms that could signal they are infected themselves, according to Reuters interviews with 13 nurses and 2 doctors who described testing shortages at their hospitals.

Many medical centers are testing only the workers with the most severe symptoms, according to the frontline workers and hospital officials. As a result, nurses and doctors risk infecting patients, colleagues and their families without knowing they are carrying the virus, medical experts say.

The New York City nurse works at Mount Sinai Hospital, a major institution in the national epicenter of the pandemic. Her nausea, upset stomach and low-grade fever did not qualify her to get a test in late March, she told Reuters on condition of anonymity. She continued to work because her fever - at 100.2 degrees Fahrenheit (37.9 Celsius) - was just below the threshold set by the US Centers for Disease Control and Prevention for sending health workers home.

But she had the virus, an infection she confirmed when she took it upon herself to get tested at a private clinic, she said.

"I knew something wasn’t right," the nurse said, "but I didn’t really think I had it."

A hospital spokesman declined to comment on the nurse’s case but said that mildly symptomatic employees could now get tested.

Mount Sinai Hospital's chief medical officer, Vicki LoPachin, told staff on April 4 that the hospital would increase testing of employees with symptoms of the virus starting on Tuesday. New York City is home of the nation's worst coronavirus outbreak, with about 78,000 cases and 3,600 deaths as of Wednesday morning.

The continued test shortages - even for the workers most at risk - is “scandalous” and a serious threat to the patients they treat, said Dr. Art Caplan, a professor of bioethics at the NYU Grossman School of Medicine.

"It’s obvious that we should be testing healthcare workers, just as points of infectivity," Caplan said.