Footage has emerged of workers in protective gear burying dozens of bodies in a mass grave in New York as the number of fatalities from the coronavirus continues to rise in the US state. 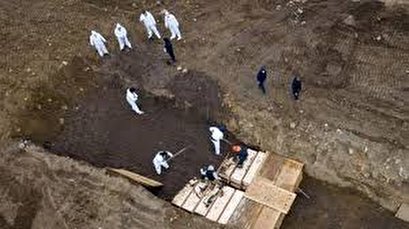 The aerial images showed workers putting caskets into deep trenches in a one-mile, limited-access strip on New York’s Hart Island, located at the western end of Long Island Sound in the northeast Bronx, Which has over the years been used for burying mostly homeless people and families that cannot afford a funeral.

Officials said the burials have been ramping up at the site as the New York state currently has more coronavirus cases than any single country.

About 25 bodies a week are buried on the island and the burials are now happening five days a week, with around 24 burials each day, according to the US Department of Correction.

About 40 coffins were lined up for burial on the island on Thursday, and two fresh trenches had been dug in recent days.

New York, the worst-hit state by the coronavirus outbreak, registered a record-breaking increase in fatalities for a third consecutive day on Thursday.

"Today we can say that we have lost many of our brothers and sisters, but we haven't lost anyone because they couldn't get the right and best health care that they could," New York Governor Andrew Cuomo said at a daily news briefing.

New York City Mayor Bill de Blasio also expressed regret over the back-to-back record number of coronavirus deaths and said the city needed to continue social distancing as well as adding more coronavirus testing capacity before the loosening of restrictions could be considered.

US officials warned Americans to expect alarming numbers of coronavirus deaths this week.