US keeps forces in Iraq, puts missile systems into operation

US officials say hundreds of their troops will remain in Iraq, noting that missile systems are now operating in the bases hosting the occupation forces. 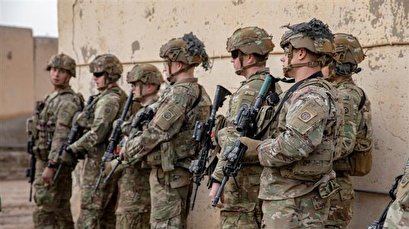 The officials, who were speaking on condition of anonymity, told The Associated Press that Patriot missile launchers and two other short-range systems were in place at Ain al-Asad air base in Iraq’s Anbar Province and at the military facility in Kurdistan’s regional capital, Erbil, without elaborating on where those systems had been taken from.

The American officials further noted that a short-range rocket system had been installed at Camp Taji, north of Baghdad.

The US-occupied camp came under a rocket attack last month. A member of the Iraqi parliamentary security and defense committee accused the United States of staging a false-flag operation against Camp Taji to find a compelling justification for air raids on positions of Iraq’s anti-terror Popular Mobilization Units (PMU), also known as Hashd al-Sha’abi.

General Frank McKenzie, the top US commander for the Middle East, said that moving Patriots and other systems to Iraq was tricky because it meant he would have to take the systems from another location where they were also needed.

Over the past few months, the US military has been moving the missile systems, piece by piece, into Iraq, assembling them and linking them together.

Meanwhile, General Mark Milley, chairman of the Joint Chiefs of Staff, said hundreds of soldiers from the 1st Brigade, 82nd Airborne Division, remain in Iraq, citing the “threat posed by what he called Iranian proxy groups.”

Only one battalion was allowed to return to the Fort Bragg military installation in North Carolina “in part because the situation with the Shia militia groups and Iran has not 100 percent settled down,” he said, stressing that “they will continue their mission until such time that we think the threat has subsided.”

The latest US military build-up in Iraq comes in defiance of an Iraqi parliament vote on January 5 that called for an end to the presence of all foreign troops, including Americans.

The vote came two days after the US military - acting on US President Donald Trump’s order - launched a fatal drone strike on General Soleimani upon his arrival in the Iraqi capital at the invitation of the Baghdad government.

The attack also claimed the lives of Abu Mahdi al-Muhandis, the second-in-command of Iraq’s Popular Mobilization Units (PMU) or Hashd al-Sha’abi, along with eight other Iranian and Iraqi people.

Washington has threatened sanctions should US troops be expelled instead of heeding the Iraqi parliament’s call to end the occupation of the country.

The US - in cooperation with Israel - also exploited the power vacuum in Iraq to deploy troops and military equipment to Iraq in violation of the country’s sovereignty.

Iraq’s newly-designated Prime Minister, Mustafa al-Kadhimi, said on Friday that the country’s national sovereignty is his red line, stressing that his government will never allow anyone to insult any Iraqi citizen by accusing him/her of being linked to foreigners.