Days after the so-called Saudi-led coalition claimed to have halted its aggression in Yemen due to the COVID-19 outbreak, the Yemeni Army has announced that it repelled several Saudi assaults on various fronts in just one day. 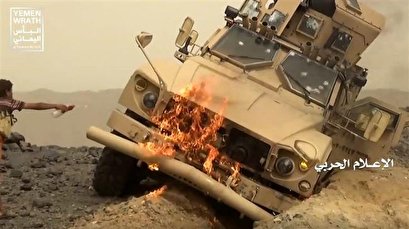 The Spokesman for the Yemeni Armed Forces Brigadier General Yahya Saree said in a tweet that the Yemen defensive operations took place from Friday morning until noon, killing and injuring dozens of enemy combatants and impeding Saudi advance.

Also on Friday, the Yemeni forces managed to shoot down a Saudi-led drone conducting “hostile operations” over the Razeh area bordering Saudi Arabia in the Sa'ada Province, according to a military source speaking to Yemen's official Saba news agency.

The news agency also reported that a Saudi-led warship shelled the Yemeni port-city of Hudaydah, violating an ongoing UN-brokered truce in the city.

The report added that the Saudi mercenaries also shelled the encircled Yemeni city of Durayhimi near Hudaydah, killing two civilians and destroying homes.

The multiple land and aerial assaults come a few days after the Saudi-led coalition claimed it was halting military operations in Yemen in support of UN efforts to end the five-year war and avoid the outbreak of the coronavirus in war-wracked Yemen.