World in grip of viral pandemic for a month, fatalities rise above 108,000

One month since the coronavirus outbreak was declared a pandemic by the World Health Organization (WHO), 108,867 people have died of complications caused by the pathogen and more than 1,777,666 people have been infected worldwide, according to data collected by Johns Hopkins University. 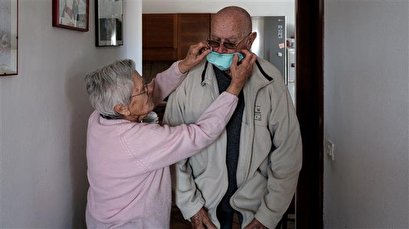 The global epicenter of the disease has shifted to the United States, and its death toll of 20,071 has surpassed Italy’s 19,468.

Here is the latest on the coronavirus pandemic:

In Europe, the pace of the deaths from COVID-19 seems to be slowing as Spain, France, and Germany reported the lowest rises in daily numbers of deaths on Saturday.

Spain on Saturday reported the lowest daily toll since March 23, as the number of deaths fell for a third consecutive day, with 510 fatalities.

The country, which is the third-worst-hit nation after Italy and the US, reported a total death toll of 16,353, the Health Ministry said Saturday.

Meanwhile, Madrid has begun to contemplate a gradual unwinding of lockdown measures, which have kept most people confined to their homes since mid-March.

It has set out guidelines for people who will be allowed to return to work from Monday in some industries such as construction and manufacturing. Companies restarting work must provide appropriate protective equipment and ensure employees have space to be at least two meters apart.

The government, however, extended restrictions on movement across Spain’s land borders with France and Portugal for another two weeks.

Italy reported 4,694 new cases on Saturday, an increase from the 3,951 a day earlier, according to civil protection officials.

Italy also registered 619 deaths in the past 24 hours, compared with 570 the day before.

The figure brings the total number of deaths to 19,468.

In a rare television address, German President Frank-Walter Steinmeier said the pandemic was a “test of our humanity.”

“No, this pandemic is not a war! Nations do not oppose other nations, nor soldiers against other soldiers. It is a test of our humanity,” Steinmeier said Saturday.

France’s fatalities slowed again for a second day on Saturday, and the number of patients in intensive care fell to the lowest in a week, officials said.

Deaths caused by the coronavirus increased by 353 during the day — the lowest number in the past four days, Director General of Health Jerome Salomon said on Saturday.

“The overall number of fatalities since March 1 has reached 13,832, of which 4,889 deaths have been reported from retirement homes,” Salomon said.

Officials said as many as 31,320 patients were undergoing treatment at hospitals and over 26,000 patients had recovered.

In Russia, Kremlin spokesman Dmitry Peskov warned that a “huge influx” of people infected with the virus was beginning to put a strain on hospitals in the capital, Moscow.

“The situation in both Moscow and St. Petersburg, but mostly in Moscow, is quite tense because the number of sick people is growing,” Peskov said. “There is a huge influx of patients. We are seeing hospitals in Moscow working extremely intensely, in heroic, emergency mode.”

The country has reported 13,584 cases of the virus, according to authorities, who said on Saturday that 12 new deaths in the past day had pushed the death toll to 106.

Peskov further said that it would become clearer only in the next few weeks whether the country was nearing the worst point in its outbreak.

In Asia, China and South Korea — the two initial epicenters of the virus — reported slight rises in new cases on Saturday.

China, the first epicenter of the virus, reported 99 new cases of COVID-19 on Saturday, according to official data released on Sunday. The figure had doubled from the previous day, and was the highest in one month, as the number of single-day imported cases in the mainland hit a record.

Only two of the 99 cases were locally transmitted.

South Korea’s death toll also rose by three to 214, according to the KCDC.

Meanwhile, officials said that some 91 people who were thought to have recovered from the disease had tested positive again.

Jeong Eun-kyeong, the director of the Korea Centers for Disease Control and Prevention, said that the patients did not seem to have been re-infected; rather, the coronaviruses in their bodies might have been “reactivated.”

This prompted the WHO to open an investigation.

“We are closely liaising with our clinical experts and working hard to get more information on those individual cases. It is important to make sure that when samples are collected for testing on suspected patients, procedures are followed properly,” WHO said Saturday.

North Korea’s leader Kim Jong-un called for tougher and more thorough countermeasures to fight the coronavirus outbreak in the country.

Pyongyang has enforced consistent and compulsory “strict top-class emergency anti-epidemic measures” to maintain a stable situation, according to the official news agency KCNA.

The county has not reported any infections yet.