Saudi-sponsored militants have reportedly seized control of a military camp in Yemen's strategic island of Socotra from UAE-backed separatists amid growing divisions. 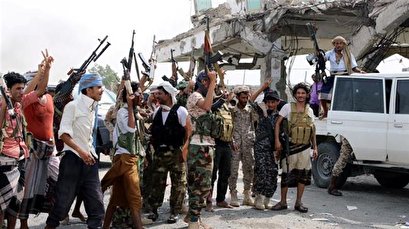 According to local sources, militants loyal to former president Abd Rabbuh Mansur Hadi took control of the military camp in the Arabian Sea island on Saturday.

They said that the UAE-backed separatists of the so-called Southern Transitional Council (STC) fled the camp before Saudi-backed forces launched their offensive.

Southern separatists seized the military camp on February. Both the UAE-sponsored separatists and pro-Hadi militants serve the Riyadh-led coalition and have been engaged, since 2015, in a bloody military campaign in Yemen.

The separatists have long sought southern Yemen to secede.

Encouraged by the United Arab Emirates, though, they had agreed to fight under the Saudi-led military coalition’s command in the war on Yemen.

Recently and after a decision by the UAE to effectively withdraw its forces from Yemen, the group has turned its weapons on rival militants loyal to Hadi.

The infighting has highlighted deepening divisions between Saudi Arabia and the UAE, the two countries that are leading the war on Yemen.

Ties between the two sides have soured over a number of issues, including what the Yemenis view as Abu Dhabi’s intention to occupy Socotra Island and gain dominance over major waterways in the region.

The island was part of Yemen’s eastern province of Hadhramaut but it was introduced as an independent province in a 2013 presidential decree.

Home to some 60,000 people, Socotra sits at the entrance to the Gulf of Aden. The island has a unique ecosystem and been listed by UNESCO as a world natural heritage site.

There are reports that Hadi leased the islands of Socotra and Abd al-Kuri to the UAE for 99 years before resigning and fleeing the country to Riyadh in 2014.

On Saturday, Mohammed al-Bukhaiti, a senior member of the political bureau of the Ansarullah movement, blasted Saudi Arabia for continuing its military aggression against Yemen, warning that the invaders should await a response in the coming days.

He made the remarks in an interview with Lebanon's al-Mayadeen television on Saturday.