Bahrain calls Senior US diplomat to leave the kingdom

Bahrain has told a senior US diplomat, who has met with representatives of the country's opposition, that he was "unwelcome" in the kingdom and should "leave immediately." 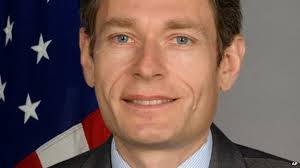 The foreign ministry accused US Assistant Secretary of State for Democracy, Human Rights and Labor, Tom Malinowski, of meddling in Bahrain's internal affairs, in a statement published by the official BNA state news agency.

The ministry said Malinowski met "with a particular party to the detriment of other interlocutors", an apparent reference to the Shiite-led opposition in Sunni-ruled Bahrain.

The ministry added that Malinowski "is unwelcome and should immediately leave the country, due to his interference in its internal affairs," the statement said.

"He is on a visit to reaffirm and strengthen our bilateral ties and to support his royal majesty King Hamad's reform and reconciliation efforts at an important time, particularly given events elsewhere in the region," she said.

She said Malinowski's visit "had been coordinated far in advance and warmly welcomed and encouraged by the government of Bahrain, which is well-aware that US government officials routinely meet with all officially-recognized political societies.

"Contrary to our longstanding bilateral relationship and in violation of international diplomatic protocol, the government insisted -- without advance warning and after his visit had already commenced -- to have a Foreign Ministry representative present at all of Assistant Secretary Malinowski's private meetings with individuals and groups representing a broad spectrum of Bahraini society, including those held at the US embassy."

She added: "These actions are not consistent with the strong partnership between the United States and Bahrain."

Malinowski met leaders of the opposition, including cleric Ali Salman, the head of the main Shiite opposition movement Al-Wefaq, which is an authorised political association, according to the group.

Al-Wefaq posted a picture of the meeting on its official Twitter account, showing Salman seated next to Malinowski and two other men with a flag of Al-Wefaq and a flag of Bahrain in the background.
- Relations unharmed -
======================
Malinowski was the Washington Director for Human Rights Watch, a vocal critic of Manama's crackdown on protests, until April when he became assistant secretary of state.
Shiite-led protests erupted in Bahrain -- home base of the US Fifth Fleet -- in February 2011, taking their cue from uprisings elsewhere in the region and demanding democratic reforms in the absolute monarchy.
Security forces boosted by Saudi-led troops ended the protests a month later, but smaller demonstrations frequently take place in Shiite villages, triggering clashes with police.
The United States has been repeatedly criticised by rights group for not taking a strong stance on Bahrain's crackdown on protests.
The opposition has campaigned for the establishment of a genuine constitutional monarchy in Bahrain.
The king launched a national dialogue to end the political impasse in the tiny kingdom.
But the opposition quit after two rounds of negotiations, complaining that authorities were not prepared to make enough concessions.
The statement carried by BNA did not say who Malinowski met but stressed that his meetings were "contrary to diplomatic norms and relations between states."
The foreign ministry said, however, that relations between Manama and Washington will not be affected.
"Bahrain reaffirms its strong and solid relations with the United States of America, and underlines that the progress and development of these ties should not be affected by such unfortunate acts," it said.
Bahrain is a strategic archipelago just across the Gulf from Iran; Washington is a long-standing ally of the ruling Al-Khalifa dynasty.
Human Rights Watch executive director, Kenneth Roth condemned Bahrain's decision to expel Malinowski.
"Bahrain expels US rights chief Malinowski for meeting with wrong people-presumably indep (independent) activists, not government parrots," he wrote on his Twitter account.
Meanwhile, Bahrain's Al-Asalah Sunni political association was quick to welcome the decision to kick out Malinowski over his "flagrant interference" in Bahraini affairs.
The pro-government Salafist group praised the move as "historic and brave," in a statement carried by Alwatan daily website.
AFP
Share to
Related News
Study reveals source of parrots' high intelligence
Tags
US diplomat ، Bahrain ، opposition ، Psaki
Your Comment