US deaths from the novel coronavirus topped 23,000 on Monday, according to a Reuters tally, as officials said the worst may be over and the outbreak could reach its peak this week. 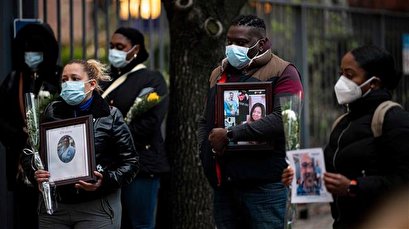 The United States, with the world’s third-largest population, has recorded more fatalities from COVID-19 than any other country. There were a total of nearly 570,000 US cases as of Monday with over 1.8 million reported cases globally.

Deaths reported on Sunday numbered 1,513. About 2,000 deaths were reported for each of the previous four days in a row.

Experts say official statistics have understated the actual number of people who have succumbed to the respiratory disease, having excluded coronavirus-related deaths at home.

The largest number of fatalities, over 10,000, was in New York state with the concentration in and around New York City, the most populous US city with about 8.4 million people.

Sweeping stay-at-home restrictions to curb the spread of the disease, in place for weeks in many areas of the United States, have taken a painful toll on the economy. With businesses closed and curbs on travel, officials and lawmakers are debating when it might be safe to begin reopening some sectors.

US nursing home deaths soar past 3,600 in alarming surge

More than 3,600 deaths across the US have been linked to coronavirus outbreaks in nursing homes and long-term care facilities, an alarming rise in just the past two weeks, according to the latest count by The Associated Press.

Because the federal government has not been releasing a count of its own, the AP has kept its own running tally based on media reports and state health departments. The latest count of at least 3,621 deaths is up from about 450 deaths just 10 days ago.

But the true toll among the 1 million mostly frail and elderly people who live in such facilities is likely much higher, experts say, because most state counts don’t include those who died without ever being tested for COVID-19.

Experts say nursing home deaths may keep climbing because of chronic staffing shortages that have been made worse by the coronavirus crisis, a shortage of protective supplies and a continued lack of available testing.