Government forces in Libya have made major gains against armed rebels under the command of renegade commander Khalifa Haftar, capturing seven cities and towns. 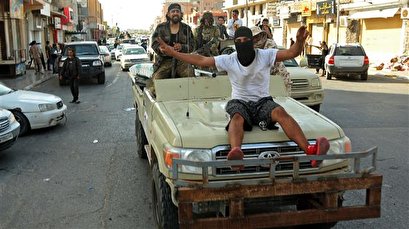 Government forces seized control of the three strategic cities of Sabratha, Surman, and al-Ajaylat, as well as the towns of Regdalin, al-Jumayl, Zelten, and al-Essa, located northwest of the capital, Tripoli, and nearly halfway to the Tunisian border, Al Jazeera reported Tuesday.

A commander with the government forces had on Monday announced the capture of Sorman and Sabratha, which lie 60 and 70 kilometers west of Tripoli, respectively, dealing a major blow to Haftar’s so-called Libyan National Army (LNA) rebels that are sponsored by the United Arab Emirates (UAE), Egypt, and Jordan.

The report cited experts as saying that the latest gains by the government forces reflected a change of strategy from a “defensive to [an] offensive mode” as the Tripoli-based government continued to battle Haftar’s forces.

It also cited sources as saying that latest clashes killed nine soldiers and more than 30 rebels, including a number of Sudanese and Chadian militants.

Haftar’s rebels have been waging an offensive to capture Tripoli since April 2019 but have been bogged down outside the capital.

Clashes around Tripoli escalated in the past week after the rebels breached a March 21 humanitarian truce aimed at facilitating efforts to combat the coronavirus outbreak in the war-torn country.

According to the United Nations (UN), hundreds of people have been killed and more than 200,000 have been displaced since Haftar launched his campaign to capture Tripoli.

Meanwhile, the rebels launched rockets against residential areas in Tripoli early on Tuesday after they were forced to pull back to an airbase.

Several homes were struck around Mitiga airbase, the only functioning, though intermittently used, airport in Tripoli’s eastern suburbs, causing panic among the civilian population. There were no immediate reports of casualties.

“The criminal militia and mercenaries have taken out their anger on residential neighborhoods of Tripoli to avenge their defeat, firing dozens of rockets and missiles on the capital indiscriminately,” government spokesman Mohamad Gnounou said.

The UN’s humanitarian coordinator for Libya said on Saturday that water had been cut off to millions of residents of Tripoli and its suburbs in an “abhorrent” act of collective punishment.

The water supply was disrupted by members of an armed group in an area 350 kilometers southeast of Tripoli, which is under the control of rebels.