Iran’s Islamic Revolution Guards Corps (IRGC) has unveiled a new technology that enables the detection and diagnosis of the new coronavirus within a 100-meter radius in just seconds. 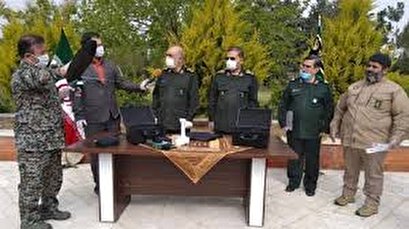 The technology was inaugurated in Tehran on Wednesday, in the presence of Major General Hossein Salami, the chief commander of the elite IRGC force, which has joined the countrywide battle against the viral outbreak along with other ranks of the Armed Forces, IRNA reported.

The technology can detect infected surfaces and diagnose individuals who carry the pathogen within five seconds. It has been developed by the scientists serving the country’s Basij volunteer force.

The IRGC commander described the development as a “novel and singular scientific advancement.”

The device, Salami explained, generates a magnetic field that screens its surroundings, and is fitted with an antenna that points in the direction of infected targets upon detecting them.

Describing its plus points, the commander explained that the technology eliminates the need for blood samples. It can also be handled remotely from its targets.

These features make the device a suitable choice for mass screening, Salami noted, adding the detection of infected surfaces will make it possible to avoid unnecessary disinfection.

“This is an amazing scientific technique that has been tested across various hospitals,” the commander said, adding that the device’s accuracy rate stands at above 80 percent.

“The technology could set the basis for the detection of all kinds of viruses,” he added.

Across the world, the new virus has claimed more than 126,800 lives, including 4,683 in Iran, and infected above 2,004,800 others since emerging in central China late last year.

Iranian defense forces assigned all their relevant resources to the fight against the viral outbreak after its emergence in the country in February.