Russian President Vladimir Putin has announced postponement of preparations for the grand Victory Day military parade across the country to mark the 75th anniversary of Soviet victory in World War II over Nazi Germany amid the novel coronavirus pandemic. 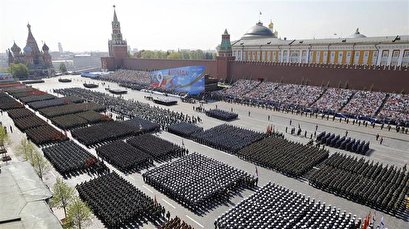 There is already less than a month left before the Victory Day and now we face an uneasy and, let us say straight, a hard choice: Both May 9 is a sacred date for us and the life of every person is priceless,” Putin said at the beginning of the Russian Security Council meeting in Moscow on Thursday as quoted by Russia’s state-run TASS news agency.

He, however, noted that proceeding under the cloud of coronavirus would be too great a risk to public health.“But the risks associated with the epidemic whose peak won’t be over [by May 9] are extremely high, and this does not give me the right to start the preparations for the parade and other mass events,” Putin pointed out.

The Russian leader went on to say that he was instructing Defense Minister Sergei Shoigu, senior law enforcement officials and local authorities to “postpone preparations for the military parade on Red Square and regional parades.”

“We will make the threat that we have faced today recede, and then we will certainly hold all events scheduled for May 9, doing this emotionally and in a festive manner. Of course, we will do it this year, 2020, given that the entire year has been declared the Year of Memory and Glory,” Putin noted.

This year's parade was meant to be a major showcase for Putin, with world leaders and veterans from all over Russia invited to watch and take part in events over four days.

Putin’s decision came a day after veterans groups urged the Kremlin to call off the event over concerns for health and safety.

A letter signed by the heads of three veterans' organizations urged the Russian president to “take a difficult but, as we see it, fair decision to hold the military parade on another date.”