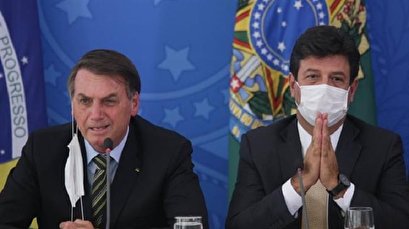 “I have just received notice of my dismissal from President Jair Bolsonaro,” Mandetta tweeted on Thursday. “I would like to say thank you for the opportunity that was given to me, to manage our health service … and to plan our fight against the coronavirus epidemic, this great challenge that our health system is about to face.”

Speaking shortly after Mandetta’s exit was announced, Bolsonaro claimed the separation had been “a consensual divorce” – but signaled dissatisfaction with his former minister’s position on the economic impact of coronavirus.

“I know … life is priceless. But the economy and jobs must return to normal,” Bolsonaro said, as he introduced his new health minister, Nelson Teich, an oncologist who was CEO of a group of private clinics and is now a partner in a medical service consulting outfit.

Mandetta’s sacking has been anticipated for weeks, as Bolsonaro repeatedly downplayed coronavirus and urged the relaxation of social distancing measures while Mandetta defended such policies.

But the move to force out Brazil’s most senior health official came just weeks before the virus is expected to reach its peak in the country. Confirmed cases have soared to more than 30,425 and 1,924 Brazilians have died.

When news of the sacking broke, shouts of “Bolsonaro murder!” were heard in central Rio de Janeiro and pan-bashing protests erupted in cities across the country.

“It absurd to change the health minister in the middle of a pandemic,” said one Rio de Janeiro intensive care doctor, speaking anonymously for fear of repercussions.

“It was a terrible decision by the president, a president imprisoned in empirical ideas without any scientific or clinical basis, who is going against everything that is happening in the world.”

Bolsonaro’s public call for Brazil to get back to work and his efforts to undermine regional governments’ shutdowns has appalled critics and sparked a political rebellion by the governors of nearly all of Brazil’s 27 states.

“Don’t think that we are going to escape a sharp rise in cases of this illness,” he said in his final briefing on Thursday. “The health system still isn’t ready [to deal with] a rapid increase [in cases].”

Writing ahead of Bolsonaro’s decision, the political commentator Leandro Colon said Mandetta’s sacking might be good news “for those rooting for Jair Bolsonaro’s quick downfall”.

Such a move would further isolate the rightwing populist and could provoke “a political reaction of major proportions”, Colon wrote in the Folha de São Paulo newspaper.