Iran says South Korea has rejected a SWIFT payment request by Tehran for purchase of coronavirus testing kits over the US sanctions. 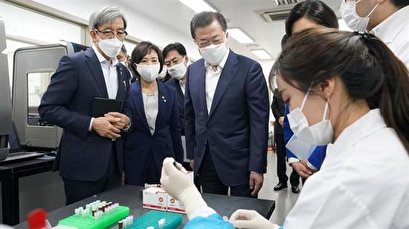 "As a result, the Korean bank rejected Iran's request and the kits were not delivered to Iran," he said.

According to the document, London-based Iran International television channel falsely claimed that the SWIFT request had been made by a software company which sought to export non-medical goods to Iran.

Jahanpour released a second document which shows South Korea's Mico BioMed, which develops and sells medical kits, had in fact presented the SWIFT request to the bank.

"The SWIFT request related [to Iran's purchase of test kits] has been rejected by the Korean bank under the pretext of sanctions," he said.

"This shows claims of medicine and medical equipment not being subject to sanctions are lies. The bank has officially stated that the purchase is not possible due to the sanctions," Jahanpour added.

Belgium-based SWIFT, the Society for Worldwide Interbank Financial Telecommunication, is used to transmit payments and letters of credit.

The US government has intensified its sanctions on Iran despite international calls on Washington to suspend them to allow the Islamic Republic to secure necessary medicine and equipment in the midst of the coronavirus fight.