The Syrian air defenses have intercepted a number of Israeli missiles over the ancient city of Palmyra in the central province of Homs. 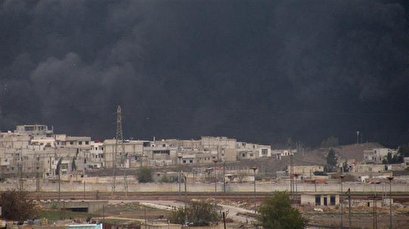 The air defense units of the Syrian army responded to the Israeli aggression over the airspace of Palmyra, Syria’s official news agency reported on Monday night.

“A number of enemy’s missiles have been shot down” by the Syrian air defenses, SANA quoted its correspondent as saying.

Israeli media claim that the target site was the T4 base in Homs, a base that Israel had attacked a number of times in the past.

Beirut-based Al Mayadeen TV channel also reports that “the Israeli attack was aimed at military targets in the northern airport of Palmyra.”

The Israeli attack was reportedly carried out shortly after 11 pm in the Homs region, approximately 150 km west of Palmyra.

In late March, the Syrian army had intercepted a number of missiles fired by Israeli warplanes in the same province.

In the March 31 incident, the Israeli missiles violated the Lebanese airspace before being confronted by the Syrian army air defenses.

Israel has been a main supporter of terrorist groups that have opposed the government of President Bashar al-Assad since militancy erupted in Syria in March 2011.

Syrian government forces have taken back many areas once controlled by the terrorist groups. The government and allied forces are currently busy fighting last bastions of militants in the northwestern province of Idlib and areas in the neighboring Aleppo province.

The large-scale government offensive in Idlib has caused increasing friction with neighboring Turkey as Ankara insists that Syria and its main ally Russia are violating the terms of a ceasefire agreement reached in Russia in September.