Iran has told foreign forces, who maintain an illegitimate presence in the region, to leave it and avoid provoking the Islamic Republic's warning. 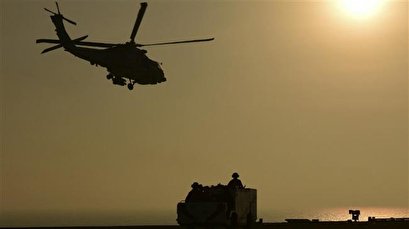 “As stated by the Islamic Revolution Guards Corps (IRGC), we firstly call on the foreign forces, who are present in the region illegitimately, to end their presence here,” Foreign Ministry spokesman Abbas Mousavi said Monday.

“We want them to leave the region as soon as possible, whatever may be the motive for their presence here,” he said.

“Secondly, observe transit regulations and not compel our forces to issue warnings and reminders,” the spokesman said, addressing the foreign forces.

On Sunday, the IRGC’s Navy issued a statement, calling the illegal presence of US terrorist forces the main source of mischief and insecurity in the region.

The statement reported how the Navy had earlier been forced to increase its maritime patrols in the Persian Gulf in response to repeated “unprofessional” behavior by US naval forces.

Mousavi’s comments and the IRGC statement came after attempts by the US Navy and US Secretary of State Mike Pompeo to misrepresent the increase in the IRGC's naval patrols.

The US Navy alleged earlier that Iranian boats had repeatedly come close to American military vessels in “dangerous and harassing approaches” in the waters, while Pompeo claimed in remarks to the Fox News that the Corps had behaved “in ways that were inconsistent with international law.”

Mousavi asserted, “This is our region, and if our Armed Forces are supposed to patrol it, it should be unimpeded.”

“Iran has existed in the region for thousands of years. The security of the region is provided by the Islamic Republic and the regional countries,” he added.

Defense Minister Brigadier General Amir Hatami has dismissed the allegations of harassment by Iranian vessels as "baseless," while Foreign Minister Mohammad Javad Zarif has slammed the US’s regional presence by reminding Washington that its forces are "7,000 miles away from its borders."