Trump says to ban immigration into US over ‘coronavirus pandemic’

Tehran 21 April _President Donald Trump has said he will sign an executive order suspending all immigration to the United States as the coronavirus crisis deepens. 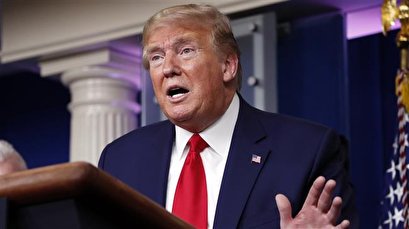 TEHRAN, Young Journalists Club(YJC)_"In light of the attack from the Invisible Enemy, as well as the need to protect the jobs of our GREAT American Citizens, I will be signing an Executive Order to temporarily suspend immigration into the United States," he claimed in a tweet late on Monday.

Trump’s decision, which has drawn condemnation from Democrats, is in line with one of his long-term policy goals of curbing immigration.

The president had promised in 2016 to curb immigration by building a wall on the US border with Mexico, and launched a crackdown on both legal and illegal entries into the country soon after he assumed office.

The White House gave no further details about the timing of the suspension, and long it would be in place, and what effect it would have on the operation of US border crossings, and on those who already hold green cards.

“You cut off immigration, you crater our nation’s already weakened economy. What a dumb move” former Democratic presidential candidate Julian Castro said in a tweet.

More than 22 million Americans have lost their jobs because of the pandemic, wiping out a decade of job gains in the country. Only last week, 5.2 million people filed unemployment claims.

Trump has been widely criticized for initially downplaying the coronavirus, which he likened to flu, before later accepting that it was a national emergency.

The president, who is seeking reelection in November, has appeared impatient with preventive measures intended to slow the spread of the virus, voicing his support for anti-lockdown protesters outraged by US governors' stay-at-home orders.

Trump has said parts of the country can begin to loosen lockdown restrictions and reopen the economy amid the rising virus death toll.