SYDNEY, July 09, 2014 (AFP) - A dozen mothers in an asylum-seeker camp have reportedly attempted suicide so their children can be settled in Australia, piling pressure on Prime Minister Tony Abbott who Wednesday said he would not be morally blackmailed. 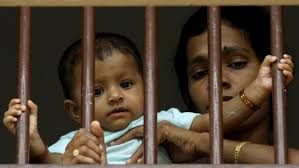 The Sydney Morning Herald said the women tried to kill themselves this week after being told they would be taken from a detention centre on Christmas Island to Papua New Guinea or Nauru.

Any boatpeople who arrived in Australia after July 19, 2013 cannot be resettled in the country, regardless of whether they are genuine refugees. They are instead sent to detention facilities or resettled on islands in the Pacific.

The damaging claims come with Australia facing growing pressure over its controversial immigration policies, with High Court action under way over the fate of 153 Sri Lankans being held in custody on the high seas.
They are currently detained on a Customs boat as lawyers argue that any transfer back to Colombo would be illegal, with concerns about the way they were screened.

It followed another boat carrying 41 Sri Lankans being returned with the adults on board Tuesday being charged in a Sri Lankan court with trying to leave the country illegally.
Abbott described the Christmas Island claims as "harrowing" but said his government would not be held hostage.
"This is not going to be a government which has our policy driven by people who are attempting to hold us over a moral barrel. We won't be driven by that," he told Channel Nine television.
"The fact is that the people that are on Nauru -- they're being clothed, housed, fed and above all else, they're safe. They are not going to be subjected to any persecution in Nauru.
"Now, I don't believe that people ought to be able to say to us, 'Unless you accept me as a permanent resident, I am going to commit self-harm'.
"I don't believe any Australian would want us to capitulate to moral blackmail."
- 'State of helplessness' -
===========================
Christmas Island Shire Council president Gordon Thompson said the women believed that if they died their orphaned children would have a better chance of being settled in Australia.
"They are saying 'the babies have a better chance at life if I am dead'," he said.
"It's a shocking conclusion to come to, but that's the state of helplessness in the centre at the moment."
The women, whose nationalities were not known, reportedly either tried to hang themselves or cut themselves with glass.
Labor opposition leader Bill Shorten accused Abbott of "washing his hands" of asylum-seekers.
"You mightn't wish this was so but these people are human beings in the care of Australia and the care of the Australian government," he said.
"It is not good enough to wash your hands on the safety of human beings."
Greens immigration spokeswoman Sarah Hanson-Young said she had spoken to people inside the Christmas Island camp, and that there was truth to reports of attempted suicide.
"Two nights ago almost 10 mothers were on suicide watch," she said, while blasting the Abbott government for pushing people to a "point of self destruction".
"It's pretty horrific to push a mother to a point of saying 'Well, if I need to sacrifice myself for my children, maybe that's what I'll do'," she said.
AFP
Share to
Tags
asylum seeker ، Australia ، boatpeople ، Papua ، Abbott
Your Comment