'Xenophobe in chief': Trump blasted over plan to suspend immigration into US

Tehran 22 April _US President Donald Trump’s suspension of immigration to the country has drawn backlash, including from House Democratic Caucus Chairman Hakeem Jeffries, who called him “xenophobe in chief.” 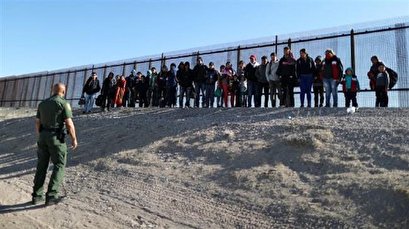 The president is expected to sign an executive order closing off the country as early as this week allegedly to battle the spread of the novel coronavirus.

"Tonight we have crossed 790,000 infections and 42,000 dead. This corrupt buffoon will will [sic] try any poisonous distraction and blame anyone to deflect from his failures that are killing our fellow Americans," tweeted New Jersey Democratic Representative Bill Pascrell.

The Trump administration has announced that the ban "had been under consideration for a while.”

“Immigrants have always made America great. Suspending immigration & giving into racism & xenophobia won’t solve our problems,” said Democratic Representative Pramila Jayapal on Twitter. “Instead it will have a catastrophic impact on our health care, food supply & the systems we are relying upon during this crisis.”