World coronavirus death toll tops 180,000 as WHO warns virus will endure ‘for a long time’

Tehran 23 April _More than 180,000 people across the world have died from the novel coronavirus, nearly two-thirds of them in Europe, since the deadly disease emerged in China last December, according to an AFP tally based on official sources. 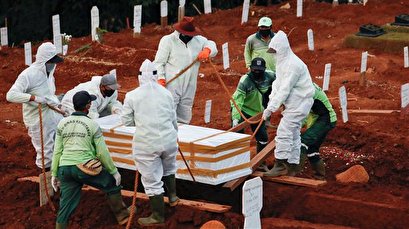 TEHRAN, Young Journalists Club(YJC)_In total, 180,289 deaths have been recorded worldwide for 2,596,383 infections, according to the tally at 1740 GMT on Wednesday.

Virus will be with us for a long time: WHO

Meanwhile, the World Health Organization (WHO) said on Wednesday that there were “worrying upward trends” in early epidemics in parts of Africa and central and South America, while also warning that opening up global travel needed to be managed carefully.

“Most countries are still in the early stages of their epidemics and some that were affected early in the pandemic are starting to see a resurgence in cases,” WHO director-general Tedros Adhanom Ghebreyesus told Geneva journalists in a virtual briefing.

“Make no mistake we have a long way to go. This virus will be with us for a long time,” he added, while noting progress in Western Europe.

He noted surges in infections in Africa such as a nearly 300 percent increase in cases in Somalia in the past week. “We are at the beginning in Africa,” Ryan said.