IRGC chief commander thanks Ayatollah Khamenei for message of support

Tehran 25 April _The chief commander of Iran's Islamic Revolution Guards Corps (IRGC) has thanked Leader of the Islamic Revolution Ayatollah Seyyed Ali Khamenei for the message in which the Leader lauded the elite defense force after the successful launch of the country’s first military satellite. 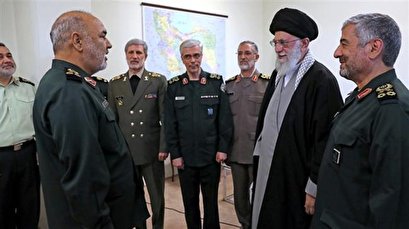 Following the launch, which was made on the day when the elite military force marked the anniversary of its establishment on April 22, 1979, Ayatollah Khamenei expressed his gratitude towards the IRGC for its performance.

“Convey my regards to the IRGC personnel and their respectable families on the occasion of its founding anniversary,” the Leader said in his message, adding, “I extend gratitude to them for their good performance and efforts. My prayers are with them.”

On Thursday, Major General Hossein Salami issued a message to thank the Leader for his “inspiring and affectionate” missive, saying that the IRGC will spare no effort in its drive to guarantee that the Iranian nation "will hold its head high."

“I apprise [you] hereby [of the fact] that the IRGC has received [the Leader’s] ‘We must grow strong” message,” General Salami stated. Upon the orbiter’s launch, General Salami had likewise noted that the space achievement represented acknowledgement of the Leader's directive.

The IRGC would, accordingly, not waiver even for a moment in its cause to establish “the modern Islamic civilization” and will endeavor to realize “the Second Phase” of the country’s Islamic Revolution by engaging in constant development of its strength and power.

Last February, Ayatollah Khamenei issued a statement detailing “the Second Phase” on the occasion of the 40th anniversary of the country’s 1979 Islamic Revolution that toppled the United States-backed Pahlavi regime of the time.