Tehran 26 April _ Iran's president has told the Qatari emir that Tehran won't initiate any conflict in the region despite the US provocative moves. 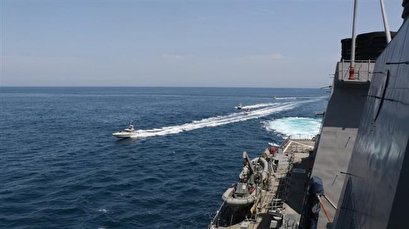 TEHRAN, Young Journalists Club(YJC)_"The Islamic Republic of Iran is closely watching and following the activity and movements of Americans, but will never be the initiator of any tension and conflict in the region," President Hassan Rouhani said on Saturday.

He made the remarks in a phone conversation with Emir of Qatar Sheikh Tamim bin Hamad Al Thani.

The Qatari emir, in turn, underlined the need for all countries to prevent escalation of tensions in the region.

During the phone call, the two sides also stressed that all countries must cooperate and strive to ensure the stability and security of the region.

The phone conversation came after US President Donald Trump claimed that he had instructed the US Navy to destroy Iranian boats “if they harass” American ships in the Persian Gulf.

"I have instructed the United States Navy to shoot down and destroy any and all Iranian gunboats if they harass our ships at sea," Trump wrote on Twitter on Wednesday.