Tehran 26 April _ Iran has denounced Israel's recent attempts at expanding settlements and annexing parts of the occupied West Bank as measures that were encouraged by US President Donald Trump’s "disgraceful" deal of the century in clear violation of international law. 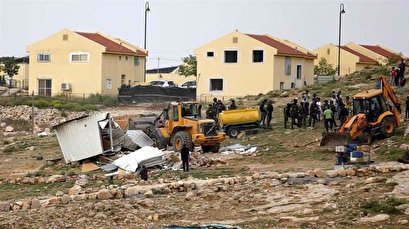 TEHRAN, Young Journalists Club(YJC)--"The Zionist regime’s recent moves to expand settlements and annex parts of the West Bank to the 1948 occupied territories are in breach of international law," said Iran's Foreign Ministry spokesman Seyyed Abbas Mousavi, adding the expansionism has been encouraged by the "Trump's shameful deal of the century."

Mousavi warned that the Israeli expansionist projects endanger peace and security in the region, calling on the United Nations and other world bodies to act against the regime's moves in the occupied territories.

Defying an international outcry, Trump in late January announced the general provisions of the plan dubbed ‘the deal of the century’ at the White House with Israeli Prime Minister Benjamin Netanyahu at his side.

All Palestinian groups have unanimously rejected the deal which gives Jerusalem al-Quds the status of “Israel’s undivided capital” and authorizes further Israeli annexations in the occupied West Bank and the Jordan Valley.

Trump’s deal gave rise to a storm of indignation and opposition among people and politicians as well as international organizations right from the start.

Referring to Israel’s taking advantage of the novel coronavirus pandemic to expand its settlement construction activities, Mousavi said, "The oppressed people of Palestine are fighting viruses such as occupation, siege and sanctions at the same time as the coronavirus."

Mousavi said the international community should not allow the Palestinian people to be displaced once again.

He reiterated that the only solution to the Palestinian crisis is to hold a referendum among the main inhabitants of the land and to establish an independent Palestinian state with Jerusalem al-Quds as its capital.