Iraq serious about US troops pullout, negotiations will start next June: Spokesman

Tehran 26 April _The spokesman for the Commander-in-Chief of the Iraqi Armed Forces says the Baghdad government is serious about implementation of the parliament's resolution concerning the withdrawal of US forces from the country. 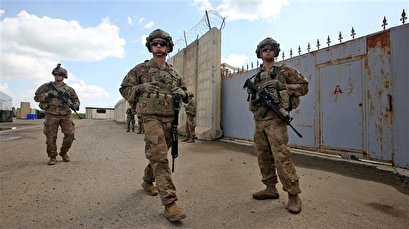 TEHRAN, Young Journalists Club(YJC)-“The letter that US ambassador to Baghdad (Douglas A. Silliman) delivered to caretaker prime minister, Adel Abdul-Mahdi, was very positive, and covered all possible forms of strategic relationship between Iraq and the United States in detail. It was important and good,” Arabic-language al-Mawazin news agency quoted Major General Abdul Karim Khalaf as saying on Sunday.

He added, “Iraq will discuss the subject of foreign forces' presence with the United States in a serious and detailed manner. The United States has significantly reduced its forces under agreement with the Iraqi government as a goodwill gesture.”

Khalaf noted that the two countries will next June discuss setting a timetable for the withdrawal of US troops in full compliance with the relevant parliamentary decisions, and a bilateral agreement on the matter will be worked out.

“Security relationship between Iraq and the United States will continue within the framework of training operations and exchange of experiences even at the time of implementing the troop withdrawal decision,” the senior Iraqi military official concluded.

Iraqi lawmakers unanimously approved a bill on January 5, demanding the withdrawal of all foreign military forces led by the United States from the country following the assassination of Lieutenant General Qassem Soleimani, the commander of the Quds Force of Iran's Islamic Revolution Guards Corps, along with Abu Mahdi al-Muhandis, the deputy head of Iraq's Hashd al-Sha’abi, and their companions in a US airstrike authorized by President Donald Trump near Baghdad International Airport two days earlier.