Tehran 28 April _President Donald Trump was repeatedly warned about the dangers of the coronavirus in January and February, US media said. 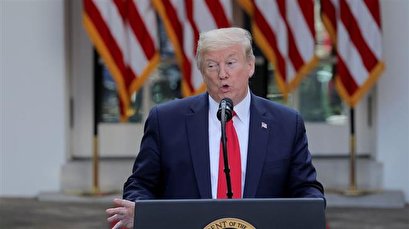 TEHRAN, Young Journalists Club(YJC)-The warnings were made in “more than a dozen classified briefings” known as the President's Daily Brief, The Washington Post reported late Monday.

Trump is under fire for publicly downplaying the threat of the pandemic when it broke out in the US in late February, and his handling of the COVID-19 crisis.

The Post said the president had received multiple heads-up about the looming catastrophe as the coronavirus started to spread, but failed to mobilize for a major pandemic.

Officials told the Post that Trump often does not read the briefings and bristles at having to listen to oral summaries.

For weeks, the president’s Daily Briefs traced the spread of the virus and mentioned the frightful political and economic consequences, The Washington Post said.

Trump claimed in late February that coronavirus cases would soon “be down to close to zero,” and did not declare a national emergency over the pandemic until the end of March, as virus cases were on the rise in New York and the stock market nosedived.

The US president’s disregard for the intelligence community’s warnings has now resulted in tens of thousands of American deaths, a battered economy, nationwide lockdowns and overwhelmed hospitals.

Senior US intelligence officials told TIME in 2019 that Trump often has a “stubborn disregard for their assessments” when presented with their analyses, particularly when it comes to anything that goes against his existing beliefs.

US virus cases nearing one million

The US recorded 1,303 more virus deaths in the 24 hours to late Monday, with confirmed cases nearing one million, according to figures reported by the Johns Hopkins University.

As states of Colorado, Minnesota, Mississippi and Tennessee were among the latest states to ease pandemic shutdowns, governor of New York, America's coronavirus epicenter, signaled that even limited restarting of business activities was at least weeks away as hospitalization rates are still high.

Trump, who is seeking reelection in November, said he expected to see US schools reopen before the end of the school year, “even if it's for a very short time.”

Business shutdowns have led to a record 26.5 million Americans losing their jobs since mid-March, with the Trump administration projecting that the jobless rate will likely hit 16% or more in April.

Almost a third of all US adults have already reported seeing their jobs or finances diminished by the coronavirus, according to a Gallup survey released on Monday.