One in three Americans found losing work, income due to coronavirus

Tehran 28 April _Almost one-third of Americans have lost work or income due to the coronavirus, especially low-income earners, by getting fired, laid off or having their hours cut, research showed on Monday. 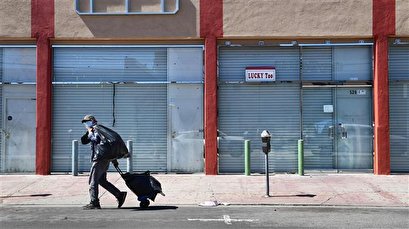 TEHRAN, Young Journalists Club(YJC)_Gallup, a U.S.-based polling company, found 30% of adults in America - a nation with nearly 256 million people over age 18 - reported seeing their jobs or finances affected by the epidemic.

Ten percent said they had been temporarily laid off – but 85% of those believed they would get their jobs back - a quarter suffered a loss of income, and one in six had hours reduced.

Among less affluent people, 4% lost their job permanently, compared with 2% of adults overall, according to Gallup, as the number of known infections in the United States topped 970,000 with more than 55,000 deaths.

"These impacts have been more pronounced among those in lower income brackets," the researchers said.

The poll was the latest study to show low income workers being hit hardest by the coronavirus, with a Pew Research Center report last week finding people of color and those without a college degree were more likely to report a job loss or pay cut.

Business shutdowns have led to a record 26.5 million Americans filing for unemployment benefits since mid-March with forecasts by the Trump administration that the jobless rate would likely hit 16% or more in April.