Tehran 28 April _Libya’s renegade military commander Khalifa Haftar has dismissed a 2015 United Nations-brokered unity accord for the war-ravaged country as “a thing of the past,” vowing to establish a new government under his rule. 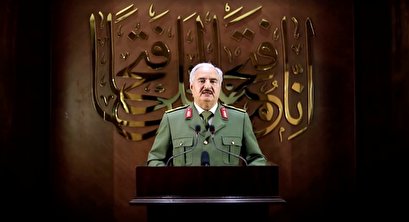 TEHRAN, Young Journalists Club(YJC)_“The General Command of the Armed Forces accepts the will of the people despite the burden of that trust, multiplicity of obligations, and the magnitude of responsibilities before God, our people, and conscience, and history,” Haftar declared in a televised address on Monday, pledging that his Libyan National Army (LNA) rebel forces will take over control of the divided country.

“The political agreement destroyed the country. We will work to create the conditions for building permanent civic institutions,” he said, referring to the UN-sponsored pact that recognized the Government of National Accord (GNA) in the capital, Tripoli.

Haftar did not clarify whether an elected parliament based in the country’s eastern city of Tobruk — which has until now been protected by his LNA militants — supported the new effort, or what its future role would be.

Addressing what he referred to as “free Libyans,” he said, “We have followed up your response to our call to you to announce the fall of the Political Agreement, which has destroyed the country and led it to the abyss, and to authorize those you consider eligible to lead this stage.”

The foreign-backed military strongman did not explain how he had obtained any popular mandate.

The development came just days after forces loyal to the internationally-recognized GNA announced yet another offensive against Haftar’s LNA on the southern outskirts of Tripoli, following a series of recent victories that liberated several strategic cities from the rebel militants.

Since 2014, two rival seats of power have emerged in Libya, namely the GNA administration of Prime Minister Fayez al-Sarraj, and the Tobruk-based group, which has been militarily backed by Haftar’s LNA.

The renegade general, who is primarily supported by the United Arab Emirate (UAE), Egypt, and Jordan, launched a deadly offensive to capture Tripoli in April 2019. His forces have been bogged down outside the capital.