‘Iran will target US bases with missiles if it faces security threat: Senior official

Tehran 30 April_A senior Iranian official has warned that the country will launch missile strikes on American bases in the region if its national security is endangered, downplaying a recent US threat of naval action as “mere propaganda.” 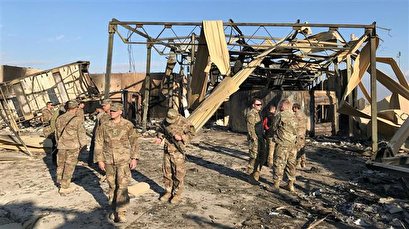 Mohsen Rezaei, the secretary of Iran’s Expediency Discernment Council, told the Doha-based Aljazeera broadcaster on Wednesday that the Islamic Republic would firmly respond to any threat against its security.

“We will never initiate a war with the United States, but the end of any war that Washington may start will be decided by Iran,” said Rezaei, a former chief commander of Iran’s Islamic Revolution Guards Corps (IRGC).

The remarks came one week after US President Donald Trump tweeted that he had directed the US Navy to “shoot down and destroy” Iranian gunboats that “harass” American ships, following a confrontation between US warships and Iranian military boats in the Persian Gulf.

According to the Islamic Revolution Guards Corps (IRGC), American vessels had resorted to “unprofessional and perilous” behavior in the waters during the incident, “causing trouble” for one of the elite force’s logistics ships that was conducting a routine patrol.

Rezaei described Trump’s threat as “mere propaganda,” but warned the US that its “bases in the region are under surveillance, and we will hit them with missiles if our national security is threatened.”

Elsewhere in his comments, Rezaei referred to a United Nations arms embargo on Iran, which will be lifted in October.

“The international arms embargo imposed on us will end soon, and no one can prevent us from buying weapons from international markets following that date,” he said. “The position of Washington and the European Union on the arms embargo on Iran is not binding for Iranians and we will not adhere to it.”

The UN arms embargo on Iran — in place since 2006/2007 — will be lifted under UN Security Resolution 2231 that endorsed the 2015 nuclear deal, officially called the Joint Comprehensive Plan of Action (JCPOA).

The US, which unilaterally withdrew from the JCPOA in May 2018, is now pushing for an extension of the embargo through recourse to a process set out in the accord, which it abandoned in 2018.