US manufacturing plunged in April: survey

Tehran 01 May_The coronavirus pandemic caused manufacturing activity in the United States to post a historic decline in April, according to an industry survey Friday, and it may stay depressed for some time. 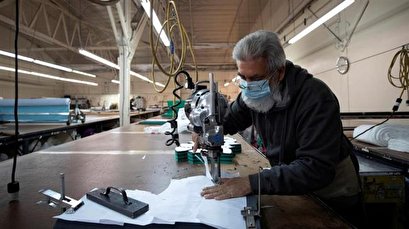 The plunge in the Institute for Supply Management's (ISM) manufacturing survey was not unexpected and actually slightly less severe than economists had anticipated, as the pandemic has also cut into economic growth and led to tens of millions of layoffs.

But while manufacturing activity may not fall much further, ISM survey chair Timothy Fiore said until a vaccine is developed, factories may have to enforce social distancing guidelines and even battle new outbreaks, meaning activity will not easily return to pre-crisis levels.

"The data supports that fact that this is the fastest rate of change in modern economic times," Fiore told reporters following release of the survey showing the ISM's manufacturing index declined to 41.5 percent from 49.1 percent in March.

That was its lowest level since April 2009, when the economy was reeling from the global financial crisis, and officially brought to an end 131 consecutive months of growth.

The new orders index plunged by 15.1 points to 27.1 percent, its biggest one-month drop since April 1951, while production declined by 20.2 points to 27.5 percent -- the lowest figure since the survey started in January 1948.

The only sectors doing well in April were paper products and food, beverage and tobacco products, which reported growth in new orders.

"COVID-19 has destroyed our market and our company. Without a full recovery very soon, and some assistance, I fear for our ability to continue operations," a respondent from a nonmetallic mineral products company told ISM.

The survey declined in March as the virus began to hit and industries struggled with lockdowns to stop the virus.

With the April data fully reflecting the pandemic's impact, Fiore said he does not think activity will sink much lower.

"I think we're still in for four to six weeks of decline, but not at the rate that we saw going into April," he said.

However, that does not mean the sector will recover when states and cities lift their lockdowns, as some officials already are considering even though the virus is still rife.

"No one, I think, is predicting an ability to give them a vaccine in the next year. That means the social distancing requirements will maintain," Fiore said.

"People have to stay away from each other and that doesn't support high output manufacturing activity."