US deploys 4 B-1 bombers, 200 troops to Guam for China ‘deterrence’

Tehran 03 May _The US military has deployed four B-1B heavy bombers and hundreds of troops to its western pacific territory of Guam to carry out “deterrence missions” aimed at Beijing after days of provocative maneuvers near contested territory in the South China Sea. 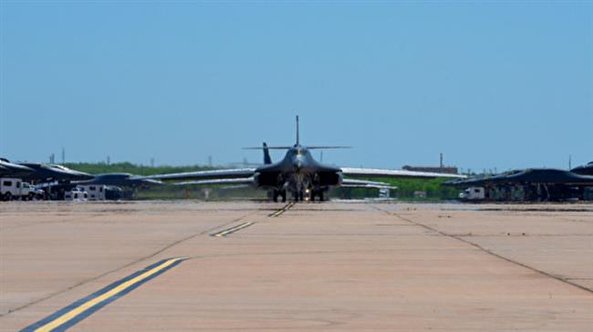 The warplanes and airmen arrived at Andersen Air Force Base on Guam Island on Friday, according to a statement by the US Strategic Command that further noted that three of the B-1B Lancers flew directly to the base, while another diverted to waters near Japan to train with the US Navy.

“Four bombers and approximately 200 airmen from the 9th Bomb Squadron, 7th Bomb Wing… deployed to support Pacific Air Forces' training efforts with allies, partners and joint forces,” read the statement, pointing out that the warplanes would also take part in “strategic deterrence missions to reinforce the rules-based international order in the Indo-Pacific region.”

The US Air Force, however, did not specify for how long the new deployment would continue.

The deployments came just one day after a pair of B-1s conducted a flyover of the South China Sea, making a 32-hour round trip from the Ellsworth Air Force Base in the US state of South Dakota as part of a ‘show of force’ operation in the region.

The US military regularly conducts what it refers to as “freedom of navigation” missions and air patrols over the South China Sea, aimed at sending a message to Beijing, which has repeatedly censured the operations as provocative and in violation of its sovereignty.

The Chinese government has yet to respond to the latest US deployment, but denounced the American naval missions near the Paracel Islands earlier this week.

Over the past week, US naval warships have also made their presence known around disputed waters in the South China Sea, with a US guided missile destroyer sailing through the Taiwan Strait twice – shadowed both times by a Chinese aircraft carrier sailing close by.

The destroyer was eventually escorted out of the area on Tuesday by Chinese air and naval forces after it, “trespassed” near the contested Xisha Islands -- also known as the Paracels -- according to Beijing.

According to the statement, although the Air Force recalled all five of its B-52 Stratofortress bombers from Guam earlier this month, the B-1s replacing them are capable of carrying larger payloads, including 2,000-pound guided JDAM munitions and anti-ship cruise missiles.

The growing American military presence in the region follows escalating rhetoric from US President Donald Trump against Beijing, increasingly blaming the country for the ongoing coronavirus pandemic without pointing to any evidence to back his claims.