US using Daesh attacks as pretext to extend its Iraq presence: Asa'ib chief

Tehran 03 May _A senior commander of Iraq’s Popular Mobilization Units says the recent Daesh attacks on PMU positions are part of a US plot to extend the American troops’ presence in Iraq. 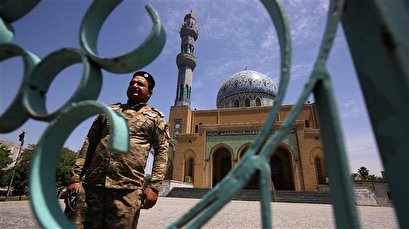 At least 10 members of the PMU – better known by their Arabic name Hashd al-Sha’abi –were killed in a coordinated attack carried out by Daesh in Iraq's north-central province of Salahuddin, the group said earlier on Saturday.

Speaking to Iraq’s Al-Ahad TV, Qais al-Khazali, the leader of Iraq’s Asa’ib Ahl al-Haq movement, strongly condemned the attack and described it as an attempt by the US government to bring terrorists back to Iraq and use it as a pretext to prolong its own presence in the Arab country.

“The recent Daesh attacks are part of the US government’s scenario to help the terrorist group resume its activities and presence in Iraq,” al-Khazali said.

At this juncture, he added, such attacks are only aimed at providing justification for the US occupation of Iraq, which serves to ensure Israel’s security and at the same time control the Arab country’s oil resources.

The top Iraqi leader then drew a connection between the growing number of Daesh terrorist attacks in Iraq and the increase in calls for the continuation of US presence made by certain “mercenaries”, and said the attacks might be related to the July negotiations between Baghdad and Washington over the presence of American troops in the Arab country.

Al-Khazali’s comments came shortly after the other PMU group Harakat Hezbollah al-Nujaba warned about a fiendish plot by the United States to transfer members and field commanders of Daesh from neighboring Syria to Iraq.

In a statement, the group expressed serious concerns over latest US military activities in Iraq, among them the transfer and relocation of troops and military hardware.

The group then dismissed the withdrawal of American troops from a number of bases across Iraq as “a smoke screen operation,” adding that Washington is hatching a new plot for the Arab country.

Hashd al-Sha’abi fighters have played a major role in the liberation of Daesh-held areas to the south, northeast and north of the Iraqi capital, ever since the terrorists launched an offensive in the country, overrunning vast swathes in lightning attacks.