Tehran 03 May _A major Iraqi resistance group has warned about a fiendish plot by the United States to transfer members and field commanders of the Daesh Takfiri terrorist group from neighboring Syria to the Arab country. 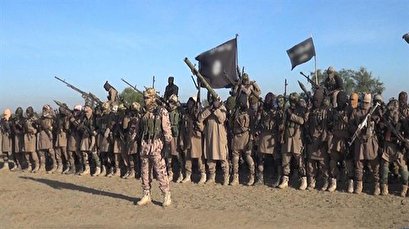 In a statement published on Saturday, Harakat Hezbollah al-Nujaba, part of the Iraqi Popular Mobilization Units (PMU), or Hashd al-Sha’abi, expressed serious concerns over latest US military activities in Iraq, among them the transfer and relocation of troops and military hardware.

The group then dismissed the withdrawal of American troops from a number of bases across Iraq as “a smoke screen operation,” adding that Washington is hatching a new plot for the Arab country.

The statement came after at least 10 members of Hashd al-Sha’abi forces were killed in a coordinated attack carried out by Daesh in Iraq's north-central province of Salahuddin, the group said earlier on Saturday.

According to a Hashd al-Sha’abi statement, nine members of the Tigris Regiment were killed and two others wounded in the town of Mekeeshfa, while one member of Brigade 41 was killed in Tal al-Dahab area of the city of Balad.

“Iraq has to chase terrorists to maintain the achievements already obtained, and to purge Iraqi territories of their presence,” Iraqi President Barham Salih’s office said in a statement on Saturday.