Tehran 03 May _NASA astronauts Robert "Bob" Behnken and Douglas "Doug" Hurley are excited and prepared to launch to space this month. 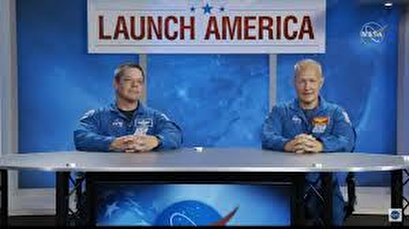 The veteran astronauts are scheduled to launch aboard SpaceX's Crew Dragon vehicle from NASA's Kennedy Space Center as part of the Demo-2 mission (DM-2) on May 27. This will be the first crewed launch from the U.S. since NASA's space shuttle program ended in 2011. If all goes according to plan, on May 28 the mission will reach the International Space Station, where it will dock and the astronauts will spend up to 3 months (the exact duration of their mission is yet to be determined.)

Today (May 1), Behnken, the joint operations commander for DM-2 and Hurley, the spacecraft commander for the mission, chatted with the media ahead of this historic launch and shared that they're both excited to take Crew Dragon on its inaugural crewed flight.

"I'm just glad to be a part of this whole big program," Hurley said. Hurley and Behnken will launch from pad 39A at KSC, where they once took off aboard shuttles. "I think, in general," Hurley added, "it's well past time to be launching an American rocket from the Florida coast to the International Space Station and I am certainly honored to be a part of it."

This flight will be not only the first crewed launch from the U.S. in nearly a decade, it will also be the first crewed launch in NASA's Commercial Crew Program and a major development in commercial spaceflight and spaceflight history in general. But the astronauts demurred. "From the historical perspective, we'll let somebody else talk about that when we get back," Hurley said.