Tehran 03 May _Iraq’s Badr organization, which is part of the country's Popular Mobilization Forces or Hashd al-Sha’abi, says the US and Saudi Arabia are seeking to reactivate Daesh, adding that recent attacks by the Takfiri terrorist group serve that aim. 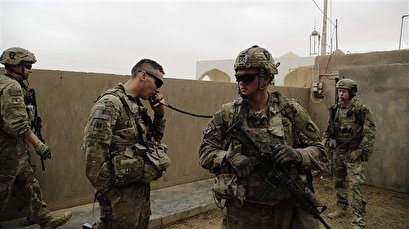 Speaking to Arabic-language al-Maalomah news agency, Mohammed Mahdi al-Bayati, a senior leader in the Badr Organization, revealed fresh attempts by Washington and Riyadh to facilitate the return of fugitive Daesh militants to Iraq.

The latest deadly terrorist attacks, which were conducted on Iraqi soil with the US and Saudi backing, were part of a plot to bring Daesh back, he added.

Bayati also noted that renewed US-Saudi support for Daesh is similar to that of 2014, when the Takfiri outfit unleashed a campaign of death and destruction in Iraq and overran vast swathes in lightning attacks.

He further raised concerns about possible terrorist attacks in the provinces of Salahuddin, Kirkuk and Anbar.

Early on Saturday, Daesh terrorists mounted a coordinated assault in the Salahuddin town of Mekeeshfa and the city of Balad, killing at least 10 Hashd al-Sha’abi fighters.

Hashd al-Sha’abi said its forces had killed and wounded a number of Daesh elements and managed to push them back in the area.

"It is with great sadness, we received news of the martyrdom of a group heroes from among the Hashd al-Sha’abi who died defending their homeland in the face of ISIL (Daesh) attacks in the Mekeeshfah and Balad areas north of Baghdad."

In the early days of the Daesh’s reign of terror, Hashd al-Sha’abi fighters played a major role in reinforcing the Iraqi army, which had suffered heavy setbacks against the Takfiri elements.

In November 2016, the Iraqi parliament voted to integrate Hashd al-Sha’abi into the military in amid US efforts to sideline the group.

Some of the equipment used by Daesh elements were new, he said, adding that most terror groups entered Iraq from Syria after the US facilitated their passage.

The fresh Daesh attack comes at a time when American forces are required to leave Iraq based on a parliamentary resolution approved in January following the US assassination of senior Iranian anti-terror commander Lieutenant General Qassem Soleimani.

The US has not only defied calls to withdraw from Iraq, but also reinforced its military presence there by deploying troops and equipment.