Tehran 05 May_Venezuelan President Nicolas Maduro says two US citizens working with an American military veteran who has claimed responsibility for a recent marine incursion attempt into Venezuela have been arrested. 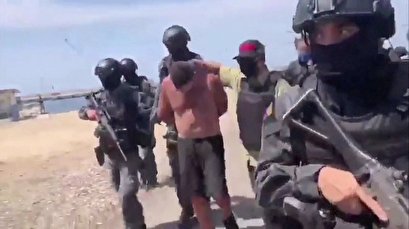 Before dawn on Sunday, a group of US-backed mercenaries tried to intrude into the northern state of La Guaira on boats, but Venezuelan authorities foiled the attack, which was launched from Colombia, killing eight of the armed men and arresting two others.

In a state television address on Monday, Maduro said authorities had detained 13 “terrorists” involved in the Sunday attack, including two Americans.

The two US citizens were identified as Airan Berry and Luke Denman.

Maduro showed the US passports and other identification cards belonging to Berry and Denman, noting that they had been working with Jordan Goudreau, an American military veteran who leads the Florida-based security firm Silvercorp USA.

Goudreau later admitted that Berry and Denman were working with him in the operation.

“They’re working with me. Those are my guys,” he told Reuters by telephone on Monday.

Maduro said the Venezuelan authorities had been aware of the plot — which was coordinated with Washington and aimed to oust him — before its execution.

Washington has been openly calling for the ouster of Maduro, increasing pressure on Caracas in recent months by indicting the leftist leader as a “narco-trafficker” and offering a 15-million-dollar “reward” for his arrest.

Opposition figure Juan Guaido, propped up by the US,  declared himself "interim president" of Venezuela amid anti-government protests last year in what was deemed as an abortive coup.