Tehran 05 May_The stakes are high for Israel’s embattled Prime Minister Benjamin Netanyahu as a Supreme Court ruling is expected later this week on the question of whether he is legally qualified to form a cabinet under a coalition deal with his main rival while facing criminal indictments. 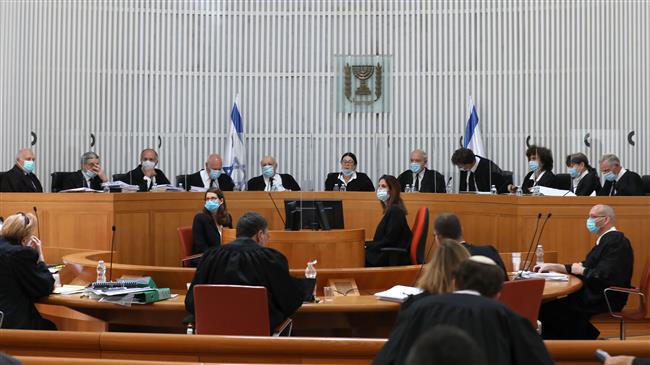 For a second day on Monday, a panel of 11 judges at Israel’s highest court heard petitions demanding that Netanyahu be disqualified from forming a coalition administration with ex-military chief, Benny Gantz, in light of the serious corruption charges he is facing.

Eight petitions have been filed with the court against Netanyahu by opposition parties and activists, including one by Yair Lapid, head of the opposition Yesh Atid.

Sunday’s hearing focused on whether Netanyahu should even be allowed to lead a new coalition cabinet, while Monday’s debate dealt with the controversial aspects of the three-year coalition deal negotiated by the two politicians.

During the hearings, the justices indicated they could nullify some clauses of the unity agreement, including those that expand the so-called “Norwegian Law” — which is about the appointment of ministers and Knesset members — and set a six-month period, during which almost no legislation unrelated to the coronavirus could be advanced and there would be no full-time appointments for senior posts.

The two parties were offered 24 hours to modify the clauses in question.

The court is expected to announce its ruling on Thursday.

The deal will entail shared premiership among the two politicians, each being allocated 18 months in office. It will also grant Netanyahu authority over important judicial appointments, which critics argue gives the premier undue sway over the outcome of his own proceedings.

Following Monday’s marathon nine-hour hearing, Netanyahu, defended the deal and said a ruling against it would prolong an unprecedented political deadlock in the Israeli-occupied territories and increase the chances of a fourth round of elections since April 2019.

The legal proceedings began a day after Israelis protested in Tel Aviv against Netanyahu’s recent coalition deal with Gantz, while the PM prepares to go on trial for charges of fraud, bribery and breach of trust that he himself has denied and dismissed as political “witch-hunt.” His trial is due to start on May 24.