Tehran, 07 May_Millions more Americans sought unemployment benefits last week, suggesting layoffs broadened from consumer-facing industries to other segments of the economy and could remain elevated even as many parts of the country start to reopen. 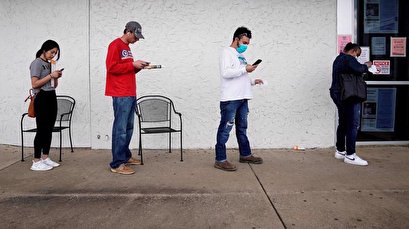 The US Labor Department’s weekly jobless claims report on Thursday showed initial jobless claims for state unemployment benefits totaled a seasonally adjusted 3.169 million for the week ended May 2, down from a revised 3.846 million in the prior week.

Economists polled by Reuters had forecast 3.0 million claims in the last week compared to the previously reported 3.839 million in the week ending April 25.

The data supported economists’ views of a protracted recovery of the economy, which is reeling from nationwide lockdowns to slow the spread of the coronavirus. The economy shrank in the first quarter at the steepest pace since the Great Recession of 2007-2009.

The weekly claims report followed news on Wednesday that private payrolls fell by a record 20.2 million in April, which set up the overall labor market for historic job losses.

It marked the fifth straight weekly decrease in applications since hitting a record 6.867 million in the week ended March 28. Still, the latest numbers lifted to about 33 million the number of people who have filed claims for unemployment benefits since March 21.

“The pace of new claims for unemployment is slowing, but remains at levels unimaginable just a few months ago,” said Joel Naroff, chief economist at Naroff Economics in Holland, Pennsylvania.

“Even with the economy slowly starting to reopen, the number of unemployed should continue to rise sharply as governments, as well as businesses that have tried but not succeeded at holding the line, are now laying off workers,” he said.

Thursday’s weekly claims data will have no impact on the Labor Department’s comprehensive employment report for April, which is scheduled to be released on Friday, as it falls outside the period during which the government surveyed establishments and households for its monthly report.