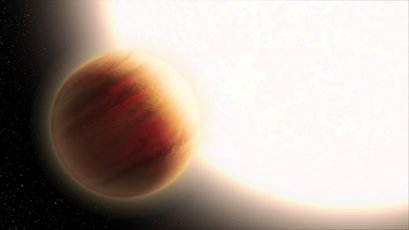 All that heat puffs up WASP-79b substantially, making it one of the largest alien worlds ever observed. Although WASP-79b is just 85% as massive as Jupiter, it's 1.7 times wider than our solar system's biggest planet.

Then there's the alien world's air, which researchers have now probed in considerable detail. Iron rain likely falls through WASP-79b's skies, which probably sport a very alien yellowish hue, a recent study reports. (Yellow on the dayside, that is; like other "hot Jupiters," WASP-79b is likely tidally locked to its host star, always showing it the same face.)

The scientists behind the new research studied WASP-79b's atmosphere using NASA's Hubble Space Telescope and the Magellan Consortium's Magellan II Telescope in Chile. These observations showed no signs of "Rayleigh scattering," a phenomenon in which small, high-altitude dust particles cause wavelengths of starlight to disperse differentially.

Rayleigh scattering explains why Earth's sky is blue: This color of light has a very short wavelength and therefore bounces around a lot more than other colors do. It's unclear why this phenomenon may not be occurring on WASP-79b, study team members said.

Share to
Related News
As part of NASA’s plan: Nokia is to bring 4G to the moon
Tags
Giant ، yellow skies ، planet
Your Comment