Tehran, 10 May_Syria’s Ambassador to the United Nations Bashar al-Jaafari says unilateral sanctions imposed by the Western countries are hampering the Damascus government’s efforts to import medicine and other medical supplies to fight the deadly novel coronavirus outbreak in the country. 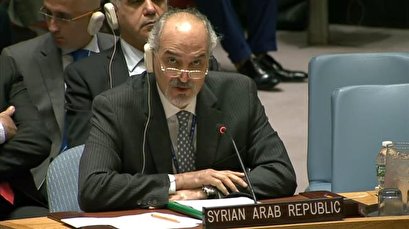 “Unilateral coercive economic measures hinder Syria’s ability to meet the basic needs of its people and confront the epidemic of the novel coronavirus,” Jaafari said on Sunday through the video link at a symposium organized by the Sanctions Kill coalition, which comprises a group of activists working to promote anti-sanctions campaigns.

The Syrian diplomat noted that sanctions continue to reduce the capacity of Syria’s public and private health sectors since the measures have affected the country’s banking sector, left it bereft of financial resources, made money transfers difficult and negatively influenced the fields of energy, industry, transport, communications as well as domestic and foreign trade.

Jaafari dismissed Washington’s allegations that food, medicine and other humanitarian supplies are exempt from sanctions, saying, “The US exemptions depend on political considerations and the aid only reaches areas under the control of terrorist groups.”

He argued that the Central Bank of Syria has been unable to provide funds for the purchase of basic commodities for Syrian people during the past year as its foreign currency reserves have been blocked.

“Syria has mobilized all its available human, medical and nutritional resources to protect all Syrians in light of the COVID-19 pandemic. Nevertheless, such capabilities will continue to shrink as a result of the unilateral coercive measures,” Jaafari concluded.

The new assertions came after in late March, Jaafari called on the international community to work on lifting illegal economic sanctions and coercive measures imposed on his war-ravaged country and other states as the world is battling to rein in a deadly coronavirus pandemic.

Speaking at a UN Security Council session on the situation in Syria via video, Ja’afari strongly condemned sanctions as a weapon in the hands of some states in their sinful war against Syria and those states, stressing that the punitive measures prevent the Syrian nation and the country’s healthcare sector from obtaining their basic needs to deal with possible cases of new coronavirus infection and treat the confirmed patients.