Fauci to testify before US Senate about pandemic

Tehran, 11 May_Dr. Anthony Fauci, the nation's leading infectious diseases expert, will testify before a Senate committee Tuesday, his first appearance before Congress since March. Fauci will appear alongside Dr. Robert Redfield, the director of the Centers for Disease Control and Prevention (CDC), and other officials to discuss reopening the economy amid the coronavirus pandemic. 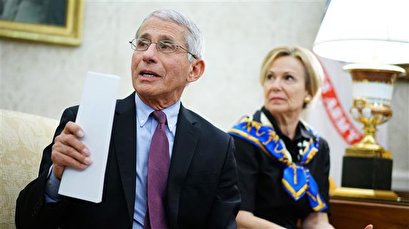 "After consulting with Dr. Fauci, and in an abundance of caution for our witnesses, senators, and the staff, all four Administration witnesses will appear by videoconference due to these unusual circumstances," Alexander said in a statement. Food and Drug Administration Commissioner Stephen Hahn and Assistant Secretary for Health Brett Giroir will also appear at the virtual hearing.

Fauci is scheduled to testify despite going into "modified quarantine" following exposure to a White House staffer who tested positive for the virus. Fauci told CBS News he is "low risk" based on the type of exposure he had to the staffer and is quarantining out of an abundance of caution.

His testimony before the Senate comes after the Trump administration blocked him from appearing before a House committee to discuss spending on coronavirus testing. President Trump told reporters last week that he doesn't want officials appearing before House Democrats, who hold the majority.

The White House Office of Legislative Affairs sent a memo to all House and Senate committee staff directors last week that bars all members of the White House Coronavirus Task Force from appearing before a congressional committee without the permission of chief of staff Mark Meadows.

White House press secretary Kayleigh McEnany said earlier this month that Fauci would not testify before the House Appropriations Committee because Meadows was told the hearing would be about funding for the Department of Health and Human Services, which she said would be a "rather odd fit" for Fauci, who works for the National Institutes of Health. She argued that it was "farcical" to say Fauci was blocked from testifying.