Tehran, 12 May_The Israeli military says one of its soldier has been killed by a stone dropped on his head during an arrest campaign near the northern West Bank city of Jenin. 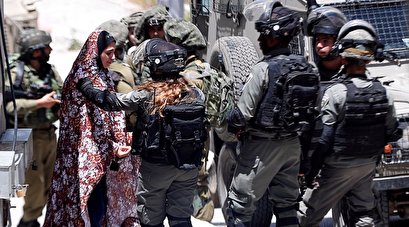 It said staff sergeant Amit Ben Ygal, 21, was struck in the head by a rock thrown from a rooftop in Ya’bad early on Tuesday during the raid on the Palestinian town.

The Israeli military added that an army unit had stormed Ya’bad to arrest four Palestinians on suspicion of alleged involvement in a “terrorist” organization and previously throwing stones at the regime's forces.

It added that Ben Ygal had been evacuated via helicopter to a hospital, where he was declared dead.

The Israeli military also noted that it was investigating the incident, with its troops searching for the perpetrator.

A Ya’bad resident told Haaretz newspaper that clashes erupted after Israeli forces arrived at the town early in the morning, when many residents were awake because of the holy Muslim Fasting month of Ramadan.

Following the incident, Israeli Prime Minister Netanyahu threatened in a tweet that "Israel's long arm will reach the terrorist and settle the score with him."

Tensions have been running high in the occupied territories amid plans by Netanyahu’s new coalition government to impose Tel Aviv’s “sovereignty” over Israeli settlements and the strategic Jordan Valley in the occupied West Bank.

US President Donald Trump’s self-proclaimed “deal of the century,” which was unveiled in January, effectively granted Israel a green light for annexation in flagrant violation of international law.