Tehran, 13 May_US top health expert Dr. Anthony Fauci says that the coronavirus is not under control contradicting President Donald Trump, who has called for a quick reopening in the country. 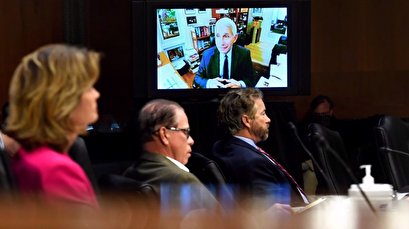 On Tuesday, a day after Trump declared the nation had “met the moment, and we have prevailed,” Fauci warned easing restrictions too quickly will result in “some suffering and death that could be avoided.”

“It would almost run the clock back rather than going forward,” Fauci, director of the National Institute of Allergy and Infectious Diseases, told the Senate Health Committee. “That is my major concern.”

Fauci also said the disease was unlikely to simply disappear unlike Trump who has repeatedly said the novel virus would go away without a vaccine.

“That is just not going to happen because it’s such a highly transmissible virus,” Fauci said. “Even if we get better control over the summer months, it is likely that there will be virus somewhere on this planet that will eventually get back to us.”

A few Democratic and Republican senators also expressed concern about the pandemic, painting a much starker picture of the virus challenges still facing the nation than the rosier outlook Trump offered.

GOP senators called for more testing, with Sen. Lamar Alexander (R-Tenn.), the chairman of the committee, saying that although it was “impressive” that over 9 million COVID-19 tests had been carried out in the country, many more were needed.

“Vaccines and treatments are the ultimate solutions but until we have them, all roads back to work and back to school go through testing,” he said. “This will require millions more new tests, many of them new technologies.”