Iran’s oil industry fights on as virus, US sanctions bite

Tehran, 13 May_Iran’s oil rig count has risen by 20 units even as major producers across the world, especially the US oil and gas industry, are stepping heavily on the brake pedal and reducing drilling at record speed because of the new coronavirus. 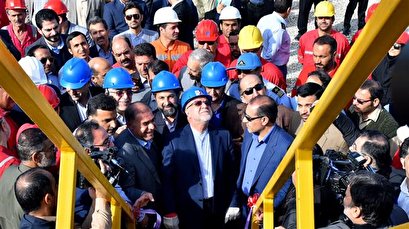 Minister of Petroleum Bijan Zangeneh said on Tuesday the spread of the disease did not stop Iran’s oil production, “thanks to persist efforts in the oil industry to protect the health of our employees”.

Iran’s oil-rich Khuzestan province has seen a spike in coronavirus cases, forcing authorities to close offices and impose travel restrictions in nine counties, including Abadan which is a major refinery town.

Elsewhere across Iran, the government has begun easing restrictions on normal life as new cases of infection have continued to decline.

“Gasoline storage in Iran has already reached an all-time high,” he said during a meeting with his deputies and Vice President Es’haq Jahangiri in Tehran.

Despite being a major oil producer, Iran was a gasoline importer for almost four decades because local refiners could not meet growing demand. The imports had turned into a strategic vulnerability for Iran which has been facing round after round of Western sanctions for years.

That ended early last year when Iran brought a major refinery project in Bandar Abbas online, making the country self-sufficient in gasoline and producing some surplus for export.