Cuba dismisses US labeling as country not cooperating in counterterrorism

Thursday, 14 May _Cuba has dismissed a move by the United States to list the country among the states not cooperating with Washington in counterterrorism, saying the Caribbean nation itself is a victim of US-linked terror. 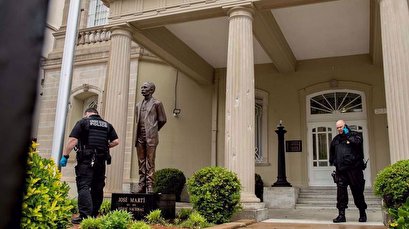 The US Department of State blacklisted the island country on Wednesday and claimed it had not fully cooperated in counter-terrorism efforts, just one day after Havana urged a terrorism probe of a shooting attack on the Cuban Embassy in Washington in April.

Shortly after the publication of the list, which included Cuba for the first time since 2015, Carlos Fernandez de Cossio, director of the Cuban Foreign Ministry’s US department, rejected the inclusion of his country in the US list.

“There is a long history of terrorist acts committed by the US government vs. Cuba and complicity of US authorities with individuals and organizations that have organized, financed, and executed such actions from US territory,” de Cossio said.

On Tuesday, Havana demanded an “exhaustive” investigation into terrorism over an early-morning shooting at its embassy in the US on April 30.

A suspect identified as Alexander Alazo, originally from Cuba, has been arrested for firing 32 rounds at the diplomatic parameters, which sustained bullet damage. No one was hurt in the attack.

According to the Cuban government, the 42-year-old suspect frequented an evangelical church in Florida popular among conservative American politicians.

The US Secret Service said that Alazo had also attempted to set ablaze a Cuban flag and instead wave a US flag but failed.

In listing Cuba, the US State Department faulted Havana over the presence of members from Colombia’s rebel leftist group, the so-called National Liberation Army (ELN), who traveled to the Caribbean nation back in 2017 to hold talks with the Bogota government but have not returned.

Colombia’s US-allied president, Ivan Duque, pulled out of the talks with the ELN after a January car bomb attack on a police academy in the Colombian capital that reportedly killed 21 recruits.

The rebels have been demanding, unsuccessfully until now, that Bogota grant safe passage to its negotiators to return from Cuba. Colombia has been at war with the ELN, which was founded in 1964.

The US listing falls under the Arms Export Control Act and will consequently have little practical effect on Havana, which does not purchase weapons from its long-time adversary.

The list is also different than the US’s list of “state sponsors of terror,” which has far-reaching legal effects. The Obama administration removed Cuba from the latter list in 2015, although the current US State Department has flirted with putting it back on.