Tehran, 15 May _A number of captured members of the Daesh Takfiri terrorist group have confessed to close cooperation with US military forces stationed at al-Tanf base in the central Syrian province of Homs to carry out various acts of terror and sabotage. 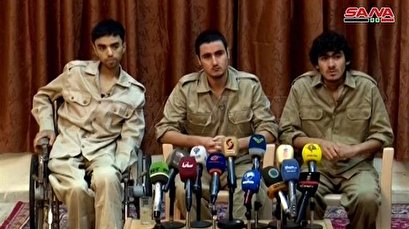 “Once a close aid to our commander Hassan Alqam al-Jazrawi came to me and said he was in contact with the Americans at al-Tanf base. The man, whose name was Hassan al-Wali, added it was necessary to target Palmyra and T4 Airbase, and that US forces would provide us with rocket launchers and machine guns, besides financial support, cars and whatever we needed.

“He added that Americans would also launch reconnaissance aircraft to monitor the movements of Syrian army soldiers in Palmyra region, and inform us of their activities,” one of the terrorists said.

The militants, who were recently arrested during a security operation in the Syrian Desert, later pointed to the existence of coordination between their commanders and those of the so-called Revolutionary Commando Army.

Elsewhere in their confessions, the Takfiris touched down upon negotiations between their leaders and senior officials with the US-sponsored and Kurdish-led Syrian Democratic Forces (SDF).

One of the terrorists said there were such talks between the two sides once in Raqqah, the former de facto capital of Daesh.