Trump: US will beat out Russia and China with 'super duper missile'

Tehran, 16 May_While unveiling the flag for his new Space Force in the Oval Office in the White House, President Donald Trump has said the United States will beat out military rivals including Russia and China with “'super duper missile.” 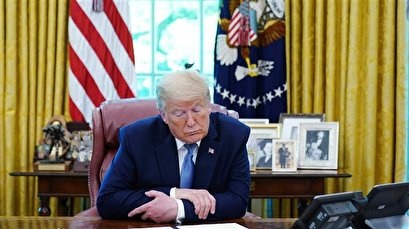 “We have no choice, we have to do it with the adversaries we have out there. We have, I call it the super duper missile and I heard the other night [it’s] 17 times faster than what they have right now,” Trump said on Friday.

“You take the fastest missile we have right now,” Trump said. “You heard Russia has five times and China’s working on five or six times, we have one 17 times and it’s just got the go-ahead.”

The US Defense Department said in March it had successfully tested an unarmed hypersonic missile, a weapon that could potentially overwhelm other missile defense systems.

According to the Pentagon, the test was conducted successfully in the US state of Hawaii, located in the Pacific Ocean.

The test missile flew along the upper atmosphere to a designated impact point at hypersonic speeds, which is over five times the speed of sound, the Pentagon said.