Hundreds of protesters demand justice for Arbery at Georgia rally

Tehran, 17 May_Angry protesters have held a rally in the US state of Georgia, demanding that two district attorneys be removed from their posts over delaying arresting two white men suspected in the shooting death of a young black man. 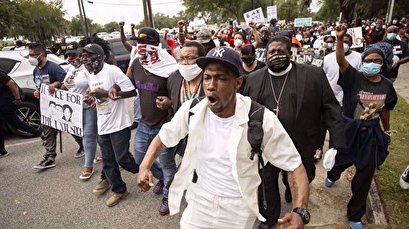 Unarmed Ahmaud Arbery was fatally shot by a white former police officer and his son on February 23 while running in the Satilla Shores neighborhood in Brunswick.

Arbery was jogging down a narrow two-lane road in Brunswick - about 300 miles (480 km) southeast of Atlanta - and Gregory McMichael, 64, and his son Travis, 34, were driving after him with guns.

On Saturday, hundreds of protesters, who were outraged by the video, rallied in front of the Glynn County Courthouse.

“Ahmaud’s death won’t be in vain,” his aunt Thea Brooks said on the steps of the courthouse as other family members stood next to her. “We are going to fight for Ahmaud. We are going to get answers when it comes down to justice for Ahmaud.”

Jackie Johnson and George Barnhill - the district attorneys for the Brunswick and Waycross judicial circuits - must be fired for their handling of the case, speakers told the crowd.

“Racism is real in America and racism is real in Brunswick, Georgia and we come today to send a message to the racists and the supremacist that we will fight you with everything that we have,” said Rev. Timothy McDonald, the pastor of First Iconium Baptist Church in Atlanta.